One of the largest turbine manufacturers in the world had a very promising five-year portfolio of gas turbines to produce and was planning an optimistic 30% net margin. The company’s portfolio consisted of over 100 programs, made of 1000’s of projects, with each project composed of a number of phases. Relying on its good past performance, the company built their strategic competitive edge around their reliability, enabling them to offer penalties for late delivery and bonuses for early performance.

About a year into that five-year portfolio, the management realized that some of the projects required to complete programs were facing significant delays. They were hoping the buffers they added at the project and program level would be enough to absorb these unexpected delays. Considering these delays, and the fact that the sales team kept promising standard lead times on new programs even though there was a growing backlog, the company was concerned about whether they would be able to meet client and shareholder commitments.

It is not only VUCCA - the Volatility, Uncertainty, Complexity, Constraints and Ambiguity - faced by managers in a project environment that makes it so hard to make good decisions and accurate predictions. It is also the fact that there is non-linearity. Small changes can have Big operational and financial performance impacts and vice versa. Dynamic Simulation models like this Project Portfolio digital twin we developed can help managers overcome this challenge.

Today, making reliable commitments to clients and shareholders is becoming more and more difficult due to higher levels of VUCCA (volatility, uncertainty, complexity, constraints, and ambiguity). Also, due to the fact that project-based companies meet the criteria of complex adaptative systems, often small changes can cause big positive or negative impacts. Traditional portfolio and project planning software cannot consider all the dynamic interdependencies, resource constraints, and variability, and as such, could not be used to answer the following critical questions the leadership team faced:

The company and their CCPM software provider and implementation partner called upon the assistance of Goldratt Research Labs (GRL), a leading source of Theory of Constraints-based research and innovation services. GRL suggested that a digital twin of the company’s portfolio of programs and projects could be developed for simulating manufacturing project management strategy. That included testing to quantify the operational and financial impact of implementing a new CCPM and Agile Planning & Execution rules to limit Work-in-Process (WIP) and enable correct execution priorities to reduce delays caused by multitasking and unsynchronized execution.

The other question the manufacturing digital twin could answer was what the most appropriate WIP control mechanism would be, and what the appropriate WIP limits would be for such a mechanism. Should they control WIP at the Program level, the Project Level, or maybe a hybrid level was necessary that would control WIP at the Program level and release more projects if capacity constrained resources ran out of work. Even the most experienced CCPM and Agile experts could not answer these questions.

GRL’s aim in this project was two-fold. Firstly, develop a digital twin that would represent this company accurately enough to provide the management team with a decision support tool to help answer their key questions. Secondly, to use the opportunity to further develop and test the self-configurable digital twin platform that they have been developing to simulate any portfolio of programs, projects, and phases for any other client with similar challenges.

The scope of this digital twin was designed for manufacturing project management to find out:

GRL has been using AnyLogic production simulation software for many years to build manufacturing simulation models that can predict the likely operational and financial impact of using traditional supply chain and project management practices versus the TOC best practices. These models are applied to show how much better companies could perform if they implemented TOC’s best practices, and what the fastest, simplest, lowest cost, and lowest risk way of doing this would be.

In this project, they decided to build the digital twin using AnyLogic manufacturing simulation software because of the following reasons: 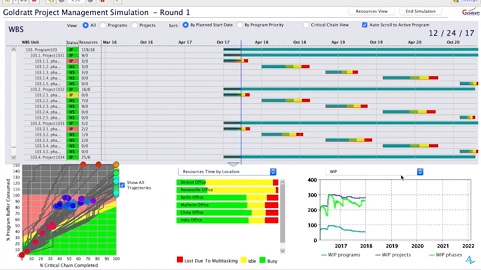 GRL had already created a manufacturing project management optimization platform in AnyLogic, allowing their developers to create a completely self-configurable digital twin of any environment. They had tested it in other business and industry fields and now adopted it for the objectives of this specific project.

In this model, both agent-based and discrete event simulation methods were used. The input of the model was the full work breakdown structure of the total portfolio, exported directly from the client’s project management system to Excel. There were also additional Excel sheets describing locations for the resources, resource availability, late completion penalties and early completion bonuses, etc. The manufacturing project management simulation model also offered users the ability to select whether to run scenarios using traditional project planning and execution practices or best practices of Theory of Constraints’ CCPM rules.

The baseline scenario was designed to see how long the simulated project management portfolio would likely take if the company continued to use traditional rules including:

The manufacturing project management simulation model was designed to offer users the ability to run it in one of three ways:

GRL presented operational and financial results of the four scenarios to the company’s management team. The first baseline scenario showed the consequences of the company following traditional manufacturing project management to complete the planned five-year portfolio of programs. It was clear that even the high net profit they used when quoting, to absorb their past strategy of spending, resources at delayed projects and programs would be insufficient to enable them to finish projects and programs on time and profitably. In fact, the manufacturing project management simulation showed, to the horror of the management team, that the company would likely be late by over two years resulting in a loss of $181 million. 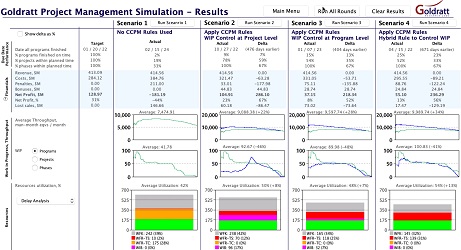 The other three scenarios were focused on how much better the company could do in both program on-time, as well as overall profitability performance, if they implemented three different WIP control mechanisms as part of their CCPM implementation.

The four scenarios created in our Project Portfolio digital twin simulation, enabled the company’s leadership and project management teams to identify which change in project planning and execution rules would have the largest positive impact on project portfolio performance and profitability.

The digital twin showed that, for the company, WIP control at the project level appeared to be the best option. Although the company was going to finish the whole portfolio nine months later, it would still have a net profit of $104 million. Moreover, since not all programs and projects had penalties and bonuses, it was possible to get even better financial results by running scenarios to identify the optimal prioritizing rules in order to ensure those programs and projects with the biggest late completion penalties and early completion bonuses were given the highest priority.

GRL’s manufacturing project management simulation also showed that they were able to create, using the AnyLogic production simulation platform, a reusable and self-configurable project management digital twin that can model any project environment. It is easily configurable, can be integrated with the company’s project management system, can consider task duration variability and other random events to accurately predict the likely outcomes using traditional vs. CCPM rules, and can also determine the impact of changes in resource allocation and prioritization rules on the company’s operational and financial performance.